The exective IOA committee wish to report the passing after a short battle with illness of member COM/OMJ Judge Brian Hogg on the 31st May 2019.They offer their condolences to his wife and family 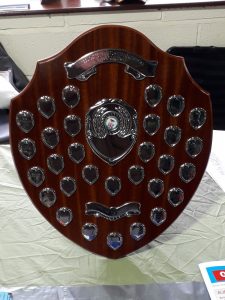 The Executive committee have decided the time is right for IOA members who have put a life times work into the IOA and the hobby should be rewarded. Our honoured members names will now go onto the ORDER OF MERIT shield. Each member will be given their own bespoke glassware which is theirs to keep.

To start the Merit shield off twelve members were put forward and all their work and achievements were discussed and agreed by the committee. Some have been in the hobby for over 60 years and have been with the IOA from the start in 1955.

For achievements to the British Bird world our first name is Bob Partridge, his knowledge makes him just about the most experience person in the UK and he is one of the few people still alive to have helped DEFRA with the 1981 Wildlife and Countryside Act. A great person, a “Breeder of a diverse range of both European and Foreign birds many of which are now not seen in aviculture, and also a BBC delegate.”

Next was Bernard Howlett, another 50/60 year breeder whose claim to fame is breeding Blackbirds, Song Thrushes, he has even authored a top selling book on Blackbirds.He has won 17 WORLD show medals with his birds and is another true legend of the fancy and very knowledgeable on rare birds. Our next three are British hardbill breeders with scores of Best in shows between then during their reign of 60 plus years as top champions. Jack Fletcher, with his winning line of Redpolls and Siskins, in his day could not be beaten another true legend. Next is Jack Lloyd, another 60 year plus breeder famous for his Greenfinches and Linnets, is now a retired businessman and former collier. Tons of knowledge and is still winning shows today and helping novices. Completing the Northern trio Terry McCracken, who still produces top draw Greenfinches and Mules and has won Best in Show several times this year!! He continues to be invited to judging appointments all over Europe. All three true gentleman still supporting shows and ready to pass on their vast knowledge. Kents Norwich canary man Ken Grigg, another breeder who has over 60 years in the hobby, Ken has also been the general sec for the Southern Norwich Plain head club for 40 years, he became a OMJ judge in 1986 and to date has been invited to place the awards at 3  World Shows, he has also won Gold Medals at World shows with his mules and Hybrids. Representing our Foreign Bird Breeders Jim Jerrard, another breeder who has over 50 years experience with specialist birds he has bred many different species of thrushes, some of which are not available any more, Dusky, Siberian, Eye Browed ,Orange Headed, Somali Golden Breasted Buntings, and a small number of Bulbuls and in recent years as bred 26 Pagoda Starlings from 2 pairs of birds. All Foreign birds.

From the canary section of the IOA Simon Tammam. He has 50 years in birds  and he joined the IOA in 1980 and is one of the only living members from that time. Simon became a OMJ judge in 1998 and has judged a world show in 2003, he has won COM Medals at world shows with his Parisian Frills. He also runs the Frill canary club and is the COM-UK technical person for new OMJ judges. From the New colour section comes the CCBA stalwart Geoff Walker, he also has over 60 years in the fancy and in 1973 he became a OMJ judge for section D and at this time is the longest serving member in the UK some achievement, he has had the honour of judging 7 World shows again know one gets any where near that record. He is also the only OMJ judge for section D in the UK. From the Stafford Canary society comes Peter Finn, he is known as Mr Stafford for all his work with this breed and has judged all over the world in his 50 years with the bird. The Lizard Canary is represented by possibly the greatest living Lizard breeder in the world Stan Bolton, he started with the bird in 1970 and passed his judging test for this breed, he has gone onto to become known as Mr Lizard and has won numerous COM world show medals, a true gentleman of the fancy, he does also breed other type of birds and is successful with them. From the Irish canary section is Maurice O,Conner, with out all his work the Irish fancy would not have made it onto the world show stage, another 50 years in the hobby person. Winner of lots of COM gold world show medals, another true gentleman of the hobby.